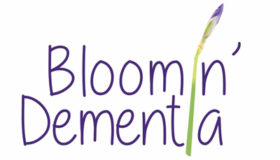 No 4 Easthorpe Street is to become the new home of Bloomin’ Dementia, a charity that supports people living with dementia and their families. The project is the brainchild of former Parish Councillor and village resident, Justine Hallam.

Dementia impacts on the lives of millions of people every year, and the NHS and social care is increasingly reliant on the charity sector to support people living with dementia and their families.

No 4 Easthorpe Street has already seen many changes, including the creation of a marvellous “memory room”, and various activities led by an activity co-ordinator will be starting soon.

Fundraising activities are underway, and the support from many Nottingham companies and individuals has been outstanding.
Great Northern Inns deserve a special mention at this time, but there are many more which are positively supporting the initiative. We’ll hear more about those in a few weeks’ time.

We’re pleased to confirm that the actor Vicky McClure (Line of  Duty, This is England) has agreed to become a patron of Bloomin’ Dementia. This is a further indication of the high level of support for the project and the increasing awareness of the need for it.

There are many other plans in the pipeline and we’ll look forward to sharing more of our success stories over the coming months. Meanwhile, it’s good to see these local premises being brought back to life and used for such a good cause.