You’re currently reading the 61st edition of The Rudd – but did you know it hasn’t always been called that?

In 1991, the first issue of The Rudd appeared as an “informative vehicle that kept villagers updated on events, happenings, gossip etc.” 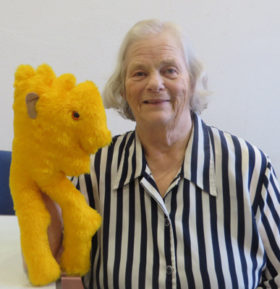 It was started by Lorna McCullough – pictured with “Rudd” the “roving reporter” – and her friend Joy Murray, and continued for 17 years until publication ceased in November 2008.  There was then a period when no local newsletter was available.

I was a Parish Councillor at this time and along with the then Deputy Clerk, Linda Cooke, we asked people whether some kind of publication should restart. The response saw The Ruddington Parish Council Newsletter begin in February 2010.

For the next seven years, it maintained its new name but was still affectionately referred to as “The Rudd”. Consequently, the team behind the newsletter approached Lorna to see if she would be happy for it to revert back to the title that she’d created back in 1991.  She delightedly agreed and hence, the first issue of the second generation of The Rudd appeared in November 2017, five years ago this month.

Throughout the period it has been produced, The Rudd has maintained its original ethos of acting as an “informative vehicle” for our villagers – and long may it continue.