Local SportsAid star James Shaw popped into Ruddington Building Society to meet the team and find out about the branch’s 2015 fundraising. The team are supporting the tennis player through the charity SportsAid. 19 year old James is currently in the top 5 senior players in the UK with a world ranking under his belt so definitely ‘one to watch’ this year.

Staff Richard Copestake and Jessica Gee told James about their fundraising plans and found out a bit more about the sport. Senior Customer Adviser Richard says ‘It was fantastic to meet James today! As well as a triathlon and ‘Pretty Mudder’ challenge, we’ve also got lots of events to look forward to in the village that we’ll be putting our tennis-spin on.’

Ruddington’s James says ‘I would like to thank Nottingham Building Society for their support this year. I have really increased my competitions this year to improve my rankings and as well as helping with training costs, it will also go towards a new chair.’

Part of the current Team GB line up, James has several international appearances scheduled for 2015 including the British Open in Nottingham in June as well as traveling to Israel, Poland, Czech Republic and Austria to compete. Aiming to improve his senior ranking this year, James is on track for Tokyo 2020. 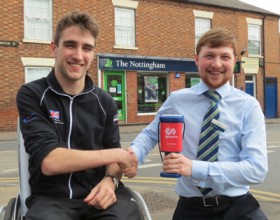