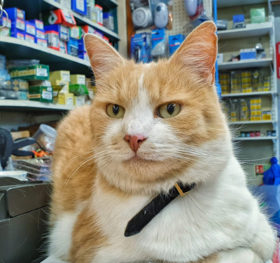 For several years, this ginger and white cat was a very visible presence in the village. He spent his time sauntering around the various businesses, public houses, homes and gardens around the centre of the village. Everywhere he went, he was welcomed and invariably fed.

Wilbur came to the village as a kitten in 2009. He lived happily with his owner Cathy, until she brought home a couple of rescue cats a few years later and he took umbrage and left home. He was then happy to receive food and affection from whoever offered it to him in the village centre.

He was regularly seen ambling across the High Street with no regard to the traffic and, ironically, drivers stopped for him. Wilbur chose to do such a thing just as the 2018 Tour of Britain Bike Race was due to pass through the village, but thankfully he was caught and held up high as the cyclists raced by.

In May 2019, he got locked in the florist’s shop for three days, but Cathy put food through the letterbox to feed him.

Also in 2019, a Facebook page dedicated to “Wilbur – King of Ruddington” was created by Nicola. This coincided with the idea to hold a party for him and raise funds for an accessible defibrillator at the same time. The event attracted local, national and international interest, with followers of the page growing to 1,904. 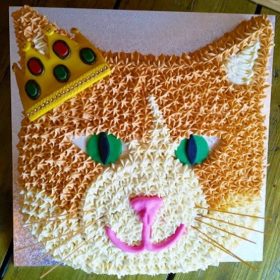 In July 2019, two 10th birthday parties were held for Wilbur. The first at one of his favourite haunts, Nottingham Building Society, and the other at The Frame Breakers. Various cat-themed merchandise was sold including knitted tails, cats, cat masks and special T-shirts. Even a special cake representing his face was made. But despite our Community Choir singing a special song for him, Wilbur didn’t appear at The Frame Breakers.

In 2020, his notoriety earned him the honour of having a new village development named after him: Wilbur Chase, off Musters Road.

Then the pandemic struck and since then, he has rarely been seen. However, I have it on good authority that he’s happy and well and still in the village. As a more mature cat (he is now 13) he now doesn’t stray far. His latest accolade is a knitted banner of him being made at the Framework Knitters’ Museum, as part of the Queen’s Platinum Jubilee Celebrations .