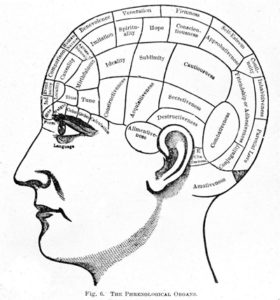 I was recently asked if I knew why Dutton’s Hill was so named. Having only lived in the village for 36 years I, am not a true Ruddite, i.e. not born and bred here. So I asked a man who has longer village connections: Gavin Walker.

An oracle of all local history, Gavin told me that the hill was named after a man called Mr Dutton who in the mid-1800s lived and worked in the property that is now the barber’s. Apparently, he was a phrenologist. This involved observing and feeling the skull to determine an individual’s psychological attributes e.g. personality and character. It was taken very seriously in that era.

Further research at our library showed that his son, George Dutton, also traded as a grocer, draper and leather-cutter in the same area of Wilford Road.

In 1909, Reuben Grice started his cycle dealer business in the same vicinity. He did bike repairs, offered car maintenance to the few car owners of that period and sold paraffin oil.

Over subsequent years, his business diversified to include furniture and electrical goods. Locals then referred to it as ‘Grice’s Hill’.