I am interested in local history. A couple of years ago, I discovered a Facebook page called “Nottingham Way Back When”. This page has over 67,000 followers and posts pictures to evoke memories.

In July 2020, they posted a picture of the Ruddington Depot, where surplus military equipment was sold at auction between 1946 and 1983.

It evoked literally hundreds of memories and one in particular caught my eye: “I’ve also got a claim to fame in Ruddington, on The Village Green, still there till this day. Has anybody seen it?”

A few months previously, I’d been told that a lady had visited the old school, now Adlard Print, whilst on a visit from Australia. She had showed them a section of the iron railings with a bit missing – and said it was her brother’s fault! 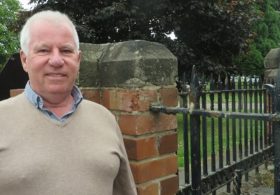 Intrigued, I contacted John Carroll who’d posted the comment and arranged to meet him. In early June, he and his wife Diane came from their home in Netherfield to Ruddington and John recalled the incident.

In the 1950s, his family lived on Asher Lane. At the weekends and in the holidays, local children used to play in the playground of the Boys’ Endowed School (now Adlard Print). On one occasion, as a young child of approximately 5 years old, he tried to copy the older children by putting his head through the railings. Unfortunately, he didn’t know that one railing space was narrower than the others and he put his head through the wrong one! He was well and truly stuck.

John’s sister ran to get their Mum and she liberally greased his neck with butter to try and release him, but to no avail. The Fire Brigade was summoned. Fortunately, at that time there was a small local fire station on Loughborough Road so they arrived quickly. They had to cut through the railings to release him – hence the gap.

We went to visit the scene of the crime and John shared the story with a current staff member at Adlard Print. John also recalled with great fondness growing up in the village and the fact that his Dad worked at the Ruddington Depot in the 1950s.

So, if you’re ever walking near Adlard Print why not see if you can spot the incomplete railing?

Pictured: John Carroll at the scene of his entrapment in the 1950s