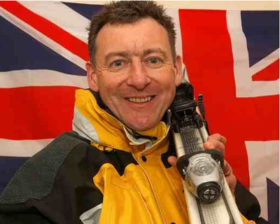 Kidney transplant recipient and Ruddington resident, Mark Brown, has been selected to represent Great Britain at the 10th Winter World Transplant Games (WWTG) in Anzere, Switzerland. The Games will take place from 7th to 12th January 2018, with Team GB comprising 12 adults and one junior, plus six children competing in the Nicholas Cup (see below). The team will be supported by more than 30 relatives, friends and nurses.

50 year old Mark, who received his donor kidney in 1994, is hoping to build on his success at previous Games. He said: “For a team that doesn’t have a great opportunity to practice winter sports, we’ve been relatively successful. This will be the sixth WWTG I’ve attended. After bringing back medals in slalom and snowboarding, I returned from the 2014 games in France with a silver in the team slalom and a gold in curling. In fact, I’ve now got three gold medals in curling – the British team literally sweep up the medals on the ice rink!”

The WWTG encourages people who’ve received a transplant to lead active and healthy lives, whilst showcasing the benefits of transplantation. The aim is to raise awareness of the need for more people to sign on to the Organ Donor Register. In the UK alone, 6,500 people are waiting for a life-saving transplant and every day, three people on the waiting list die. 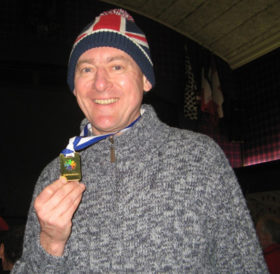 A big part of the WWTG is the Nicholas Cup. Mark explains “A seven year old boy from California, Nicholas Green, was killed by highway robbers in 1994 while vacationing in Italy with his family. His parents agreed to donate his organs and corneas, which went to seven Italians waiting for transplants. Reg and Maggie Green spoke openly to the media, with no bitterness, about their loss and decision. The world took the story – and the Greens – to its heart. Organ donations in Italy have quadrupled since Nicholas was killed and thousands of people are now alive who would otherwise have died.”

In memory of Nicholas, the Nicholas Green Camp takes place during the Winter World Transplant Games, culminating in a slalom race at the end of the week where the children compete for the Nicholas Cup.

Adds Mark: “The Games provide the dual opportunity to give thanks to the donor families – without which none of the athletes would be here to compete – and encourage everyone to discuss their wishes about organ donation with their families.”

To join the NHS Organ Donor Register and help save lives, call 0300 123 2323 or visit www.organdonation.nhs.uk.