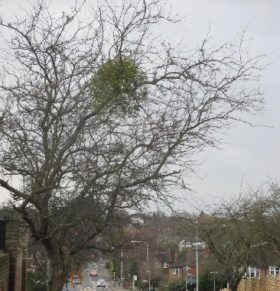 Mistletoe is strongly associated with Christmas, but did you know mistletoe grows in Rushcliffe?

Last year, Rushcliffe Nature Conservation Strategy Implementation Group (RNCSIG) carried out a Mistletoe Survey, which was very successful and generated over 25 records, 14 of which were from locations in West Bridgford.

We now know that mistletoe grows in Aslockton, Cropwell Bishop, Edwalton, Gamston, Keyworth, Lady Bay, Radcliffe on Trent, Ruddington, Tollerton and West Bridgford. RNCSIG now wants to find out how common it is in these areas and if it grows elsewhere in Rushcliffe.

We’re interested in mistletoe because it supports a wide range of wildlife, some of which can be rare and adds value to the biodiversity of an area. Winter is a particularly good time to spot it in the trees and it has a characteristic appearance, as illustrated by the photo of mistletoe in a West Bridgford tree.

If you’re new to the survey and suspect that mistletoe is growing in a local tree, please let RNCSIG know by completing the online record at www.surveymonkey.co.uk/r/R_mistletoe. Also, if you participated last year and spotted some new locations, we’d be very pleased to hear from you.