Young environmental activists from St Peter’s Junior School have been planting 270 trees in the school’s grounds to help improve the environment and combat climate change.

The school was supplied with the trees by the Woodland Trust as part of an action plan by the school’s “Green Team,” which aims to reduce the school’s carbon footprint and impact on the environment.

The team, made up of 52 seven-to-11-year-olds from all year groups in the school, was formed earlier this year after children said they’d like to do more to protect the planet. 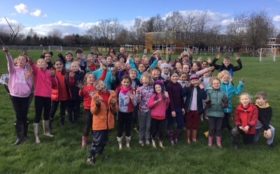 “I’m very proud of the children’s commitment,” said deputy head Ian Mawer, who co-ordinates the group. “We have an amazing 52 children who wanted to join the Green Team, and although we were initially going to have a small committee, we didn’t want to turn anyone away.

They’ve shown a huge amount of enthusiasm and come up with lots of ideas for things we can do to help St Peter’s have a positive impact on the environment.”

The tree-planting is part of a larger action plan from the Green Team, which has already seen them recycling crisp packets and plastic pens in school. In the future, they also hope to encourage the school to think more about the products it buys to reduce packaging, and to encourage pupils to think about steps they can take at home and in the wider community.