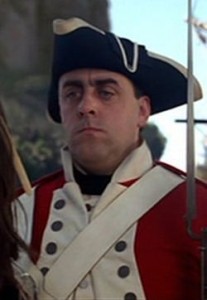 Did you know our village has spawned a Hollywood actor who’s rubbed shoulders with Johnny Depp in no fewer than four smash-hit movies? As well as playing the key role of Mullroy in all three Pirates of the Caribbean films, Angus Barnett acted alongside Depp in Finding Neverland. He’s also appeared in many other productions on the big-screen and on stage, and is a well-known face on British television.
Angus was born here in Ruddington in 1963 and attended West Bridgford Comprehensive School. As a teenager, he joined the Theatre of Cooperative Arts in Nottingham and went on to train as an actor at the Bristol Old Vic Theatre School. He also performed with the National Youth Theatre in London. In 1997, he was hand-picked to appear in the Japan-Thai Contemporary Theatre’s production of Red Demon which toured Japan & Thailand.
Other theatre credits include Nathan Field’s play A Woman is a Weathercock and appearances in King Lear, Twelfth Night, A Midsummer Night’s Dream and King John. Angus numbers parts in Calendar Girls, Irish Jam and Color Me Kubrick amongst his other major film roles. His most recent TV appearances include MI High, Crusoe, Little Dorrit, Skins and Fairy Tales.
We’re delighted to see Angus making such a success of his acting career and putting Ruddington firmly on the map. If you know any other famous faces that hail from our village, please let us know!
(Researched & written by Faye Stenson)