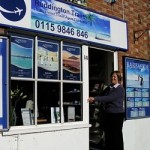 Businesses on Church Street were targeted in an early morning raid on Ruddington – but the would be thieves left empty-handed.
Ruddington Travel came off worst in the attack which took place just after 2am on Tuesday 19th October.  CCTV cameras in the village picked out at least three hooded and masked men with crowbars and cutting equipment checking out several businesses on High Street before attempting to cut through padlocks on the new security shutters at David Richards’ Jewellers.  When they failed to make any progress they seemingly chose an easier target just across the road – despite the fact that no money or anything of great value is left there.
Later that morning when owner Nicola Henry arrived for work at the travel shop – which also houses her wedding agency – she found the door boarded up, displaying a police notice.  The entrance had apparently been ram raided to gain access.  Once inside she found a trail of destruction, even though nothing appeared to have been stolen:
“I was beside myself, and just sobbing” said Nicola.  “I was so upset, and couldn’t believe what had happened to my pride and joy.  I felt violated and couldn’t believe anyone would do such a thing.  It’s not as if we have anything valuable in here to take!  I have had this business for 10 years and got it fully established and we’ve never had a problem like this, so it has knocked me for six completely”.
Shop manager Sarah Eborall, who returned from holiday the following day to learn of the break-in, added “This is just mindless and has caused unnecessary aggravation and a lot of extra work.  The shop door was badly damaged and now needs replacing, the mess that was caused through the back needed sorting out and putting back in place as it had been rifled through.  And there are a couple of cheque books that we can’t seem to locate so consequently have had to put a freeze on these bank accounts and look at opening new ones.”
(Researched & written by Graham Wright)